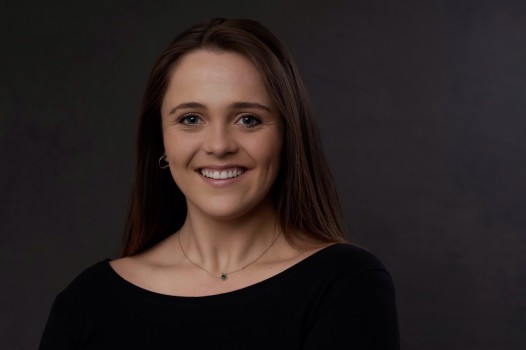 This is the happy, smiling face of Laura Bailie, our newly-appointed Musical Director. We were all struck by her friendly approach and, more importantly, her enthusiasm and passion for choral singing. After almost 2 years of no rehearsals, the singers may be a little rusty but Laura is anything but. We can't wait for her to get us back up to performance standard ready for our 2022 concert programme - starting with the rescheduled Music from the Heart on 2nd April.

Originally from Northern Ireland, Laura has just completed her Masters in Choral Conducting at The University of Birmingham under the tutelage of Simon Halsey CBE. Prior to her studies at Birmingham, Laura graduated with BA Honours in Classical voice at Leeds Conservatoire where she primarily focused her singing in opera studies, as well as taking conducting as her major specialism.

Starting as a chorister from a young age, Laura’s passion for choral music prompted her to pursue a path in solo performance. From there, she performed various oratorios, operas and solo recitals. In 2017, Laura was awarded the Margaret Markland Award from the Yorkshire Philharmonic Choir and the Diocese of Leeds Choral Scholarship, as well as attaining the position of residential singer for the Leeds Youth Wind Orchestra.

In addition to her vocal studies, Laura also discovered her love for conducting and, since then, has been working alongside choral societies in West Yorkshire.  Following this, she was appointed as Musical Director of the Leeds Conservatoire SU Chorus which precipitated her invitation to prepare the conservatoire’s chorus for a ‘Side by Side’ rehearsal with Opera North. Laura spent her final year in Leeds working with Ilkley and Otley Choral Societies and was honoured to be the guest conductor for their 75th anniversary concert. Simultaneously, she assisted various conductors around England,  both in an orchestral and choral setting.

She is now using her considerable talents getting Divertimento into shape and ready for a bright new future.

We are absolutely delighted to welcome new Musical Director Laura Bailie. This column is far too small to do her justice so click here to find out more about this talented young conductor...

Our online box office is now up and running and is by far the quickest and easiest way to order your tickets. Just print them out at home and bring them along to the concert. Don't worry if you don't have a printer, we'll automatically have your details at the door.